Iron Mountain and its longstanding partner CyArk announce the digital preservation of the Palacio de Bellas Artes in Mexico City. In 1987, the Palacio de Bellas Artes was marked as a World Heritage listing of the “Historic Center of Mexico City.” Also known as the Palace of Fine Arts, construction began at the turn of the 20th century and due to its immense weight, the first floor has subsided and is now located in the basement level. The National Institute of Fine Arts and the Mexican Secretary of Culture determined this to be in need of digitization and enlisted CyArk’s technical expertise, with Iron Mountain’s financial support.

CyArk is an international nonprofit organization that uses 3D laser scanning, photogrammetry, and traditional survey techniques, to create digital renderings in a 3D library of the world’s cultural heritage sites before they are lost to natural disasters, destroyed by human aggression, or ravaged by the passage of time. The project is supported through Iron Mountain’s Living Legacy Initiative, which is our charitable commitment to help preserve and make accessible cultural and historical information and artifacts.

“We are grateful for Iron Mountain's support to complete our first project together in Mexico,” said John Ristevski CEO at CyArk. “The Palacio de Bellas Artes is one of the most important sites in Mexico City and our digital documentation work will provide site managers with the tools they need to ensure the longevity of this incredible landmark.”

Built between 1904 and 1934, the Palace is now in danger of continual sinking and earthquakes. Through the usage of laser scanning (LiDAR) through drones and tripods, CyArk was able to document and create a 3D surface model. LiDAR scanned every surface of the Palace exterior; the theater, including the decorative arch above the state; the decorated glass roof; and the one of the kind state curtain, which was made by Tiffany’s in New York City.

The iridescent arch is a unique piece art with tons of depictions of mythological figures included the muses and Apollo, while the stage curtain weighs over twenty-four tons and is composed of over a million of stained glass pieces and depicts the two volcanoes of Popocatépetl and Iztaccíhuatl that overlook the valley of Mexico and have mythological importance. The exterior of the building is clad with Neoclassical and Art Nouveau, while the interior is primarily Art Deco containing famous murals by Diego Rivera and Siqueiros. Moreover, this curtain is the only fold-able curtain of this scale and gravitas in the entire world. In addition, the transparent ceiling depicts Apollo surrounded by nine muses was created by Hungarian artists Géza Maróti.

“The Palacio de Bellas Artes is one of the most emblematic and beautiful buildings in Mexico City,” said Guillermo Guerra, Iron Mountain Mexico country manager. “We share CyArk’s vision to preserve our unique cultural heritage which will ensure the longevity of the site. We were pleased to support their work and together act as the guardian of this important asset, making it discoverable to all.”

CyArk assists with those that oversee cultural heritage sites by providing engineering drawings and detailed maps to assist in critical conservation work and active management. They archive the data using state of the art processes to ensure that this data continues to be available in a disaster recovery scenario, tomorrow or decades in the future. Iron Mountain provides data back-up and preservation for the “gold copy” for all of CyArk’s data from digital scans in its underground storage facility. Past projects include the preservation of Lukang Longshan Temple in Taiwan; the Washington Monument in Washington, DC; the Brandenburg Gate in Berlin; The Royal Exhibition Building in Melbourne, Australia; Rapa Nui at “Easter Island”; and Fort York in Toronto Canada. 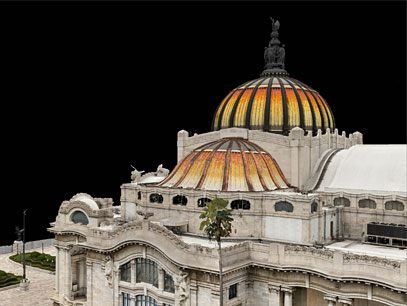