Did you know in one of the most modern cities in the world that archaeological digs are occurring? Right now archaeologists are unearthing New York City's past for future generations to discover and learn from and Iron Mountain is partnering with the New York City Landmarks Preservation Commission to preserve those artifacts.

The NYC Landmarks Preservation Commission (LPC) launched the NYC Archaeological Repository in Manhattan, called, "The Nan A. Rothschild Research Center." The launch was made possible thanks to financial support from Iron Mountain's Living Legacy Initiative, along with The Durst Organization, the Museum of the City of New York, and the Fund for the City of New York. Together, we helped make New York City the first municipality to host a digital archive dedicated to its robust archaeological collections. The launch included the release of a new website, nyc.gov/archaeology, where visitors can uncover the city's past by searching and browsing its archaeological collections.

The New York City Landmarks Preservation Commission worked in partnership with the Museum of the City of New York to create a systematic database with images for 14 of the city's archaeological collections. They created a website where visitors can uncover the city's past by searching and browsing the collections. The site includes image exhibits of the collection's highlights, overviews of archaeological sites, in-depth reports, quizzes for varying skill levels, curricula for teachers, and advanced search capabilities. Iron Mountain's financial and inkind support made the digitization and storage efforts of these documents possible.

"Our Living Legacy Initiative is our philanthropic mission to help preserve cultural heritage," said Ty Ondatje, SVP of Corporate Responsibility and Chief Diversity Officer. "Our support of this project will help connect New Yorkers of today with the city's past – sharing their heritage and unwritten histories – and then providing access to the experiences of the archaeological working to uncover and document these artifacts and stories. This partnership is especially meaningful to our roots are in NY, dating to our founding in 1951 and we're proud to help preserve and make accessible NYC's history."

The Landmarks Preservation Commission is the mayoral agency responsible for protecting and preserving New York City's architecturally, historically and culturally significant buildings and sites. Since its creation in 1965, LPC has granted landmark status to more than 36,000 buildings and sites, including 1,364 individual landmarks, 117 interior landmarks, 10 scenic landmarks, and 139 historic districts and extensions in all five boroughs. Under the City's landmarks law, considered among the most powerful in the nation, the Commission must be comprised of at least three architects, a historian, a realtor, a planner or landscape architect, as well as a representative of each borough.

"The Nan A. Rothschild Research Center has over a million artifacts from archaeological projects conducted all over the city and includes everything from a point a hunter used 8,000 years ago in College Point, Queens to a 19th century ceramic jar made in Lower Manhattan," said Meenakshi Srinivasan, the Chair of the Landmarks Preservation Commission. "New York City is the first municipality to systematically collect, catalog, curate and make accessible the City's archaeological resources. The everyday objects in the collection reveal what life was like for people who were not documented in the historic record. Now researchers may come and study these artifacts at the repository or anyone anywhere may access them through our new website."

The Archaeological Repository is a 1,429 sq. ft. climate-controlled space containing 1,518 boxes of archaeological artifacts from more than 31 sites in all five NYC boroughs. The artifacts range from things like wine bottles from the 17th century New Amsterdam to passenger pigeon bones from the 19th century. Before the repository was created, these archaeological collections were stored at 14 sites throughout the city. Now having a single climate-controlled space ensures that the collections are protected and preserved. 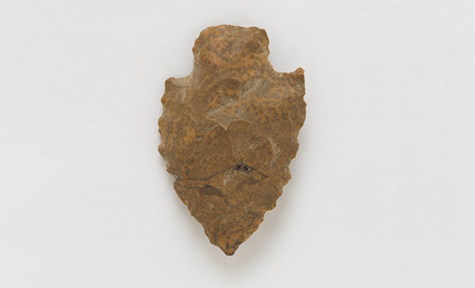