Our charitable partnership with The Sports Museum sponsors a new exhibit that captures the rise of women in team sports since the passage of Title IX in 1972.


In honor of Women's History Month, yesterday The Sports Museum unveiled a new exhibit: "TEAMMATES: Voices From Title IX." Iron Mountain customers and employees, as well as media and the general public attended the exhibit opening and a panel discussion featuring prominent athletes, journalists and broadcasters. Iron Mountain is the Official Archive Partner of the Sports Museum.

Title IX states that: No person in the United States shall, on the basis of sex, be excluded from participation in, be denied the benefits of, or be subjected to discrimination under any education program or activity receiving Federal financial assistance.

Iron Mountain's primary charitable focus area is in preservation. Called our Living Legacy Intiative, we are committed to the preservation of cultural and historical information, world artifacts and treasures. Every day we protect our customers’ most vital assets and we extend this same expertise to selected charitable partners. Moreover, Iron Mountain is proud to support the Sports Museum as there are many sports enthusiasts amongst our employees and Iron Mountain is a champion of women initiatives. In this way, we have found a unique niche of preserving and sharing women’s contributions in sports.

"Post Title IX, change didn’t happen overnight, but the entire landscape of women's sports shifted with its passing and is far different today than it was prior to the 1970s," said Ty Ondatje SVP Corporate Responsibility and Chief Diversity Officer. "Iron Mountain is proud to support the Sports Museum spotlighting the many women pioneers who paved a path and consequently helped athletes, coaches and journalists participate in the future."

TEAMMATES: Voices from Title IX showcases a sampling of competitors, chroniclers and builders in a wall-to-wall interactive timeline highlighting notable female sports figures from the last four decades. It also has audio, artifacts, quotes and other elements celebrating athletes like Jenny Thompson and the Olympic swim relays; news anchor Robin Roberts; and coaches/executives like NBA Coach Becky Hammond. Other featured women include Julie Foudy who was captain of Team USA when they had their historic win at the 1999 Women’s World Cup soccer match and Kathryn Smith who became the first full-time female NFL coach with the Buffalo Bills this past January.

To celebrate this unveiling, The Sports Museum and the Boston Globe co-hosted the luncheon and panel as part of their Legendary Lunch Series. Moderated byHall of Fame sportscaster Lesley Visser, the panel established women in sports, including TD Garden President Amy Latimer, who was named the first female president of a U.S. arena in 2012; ESPN contributor and writer Jackie MacMullan; four-time U.S Olympic hockey player Angela Ruggerio; and current University of Rhode Island basketball coach and former Georgetown player Daynia La-Force. It also provided attendees with an exclusive first look at the new, interactive sports display.

To read more about the Iron Mountain and Sports Museum partnership, click here. 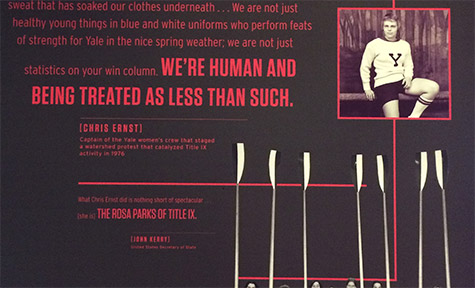