As a young child in 1945, Virginia Mulligan was the daughter of a Maryland farmer, and lived a life far removed from the battlefields of World War II. Then one day four men arrived: German prisoners of war assigned to work on the farm. Suddenly, The War was literally in the Mulligans' back yard in Worton, MD, as the POWs helped the family bale hay, shuck corn, and chop wood, while Virginia's mother gave them meals. Virginia's older brother, who was serving in the military as a bombardier, returned from the war to discover his relatives on the home front living amicably alongside the "enemy."

This is just one of the dozens of stories captured through the StoryQuest Project at Washington College in Chestertown, MD. An oral history program led by undergraduate students at the college's C.V. Starr Center for the Study of the American Experience, the project's mission is to document and present stories from the home front through hundreds of recorded interviews.

StoryQuest preserves the often overlooked memories of the millions of men, women and children who — although they may not have served in uniform — were profoundly impacted by, and contributed to, World War II. The stories are being made available online through a partnership between Washington College and Iron Mountain Incorporated.

"Iron Mountain's philanthropic mission is focused on preserving all manner of cultural and historical experiences in order to document and celebrate our shared human history for future generations," says Ty Ondatje, senior vice president for Corporate Responsibility and chief diversity officer, Iron Mountain. "Our Living Legacy Initiative gives us the opportunity to extend that focus to organizations that share that mission, like Washington College's C.V. Starr Center for the Study of the American Experience and the StoryQuest Project. We're thrilled to partner with Washington College to lend our expertise and help preserve these narratives so that future generations can experience these stories."

Iron Mountain supported the collection of interviews and digital preservation of these stories from everyday Americans during the greatest global conflict in human history. With 2016 marking the 75th anniversary of the United States's entry into World War II, the StoryQuest Project is bringing to life the experiences of wartime civilians whose stories may not be as well-known as those of veterans.

"The StoryQuest interviewers are all Washington College undergraduates, which has been a key to its success," said noted historian Adam Goodheart, the Starr Center's director. "Some of the people we interview have grown accustomed to thinking that their homefront memories, unlike veterans' combat experiences, aren't really 'history,' But there's something special that happens when a 19-year-old sits down with a 90-year-old: the older person feels that they're passing their life stories to a new generation, and they're talking to someone who's around the same age that they were in the 1940s. We're very grateful for Iron Mountain's generous support — which is not only preserving essential history, but also training the next generation of oral historians and digital archivists."

From an electrician working to transform a Navy gunboat into Harry Truman's presidential yacht, a college physics major joining the Manhattan Project, or a young woman recruiting migrant workers from the South for a local munitions plant, the Storyquest Project will introduce future generations to a completely different side of the struggle against fascism — one that took place alongside the heroic deeds of soldiers half a world away. 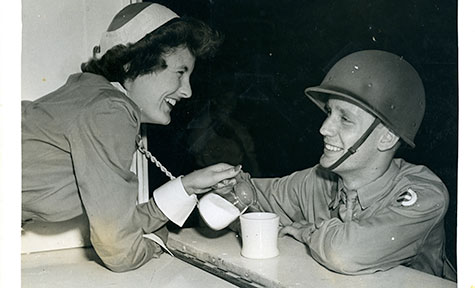