In honor of the “Days of Remembrance,” Iron Mountain participated in the annual event on April 28-29, 2019 in Washington, DC. The Days of Remembrance of the Victims of the Holocaust (DRVH) is an annual 8-day period designated by the United States Congress for civic commemorations and special programs that help citizens remember and draw lessons about the Holocaust. The annual DRVH period normally begins on the Sunday before the Israeli observance of Yom HaShoah, Holocaust Memorial Day, and continues through the following Sunday, usually in April or May.

A National Civic Commemoration is held in Washington, D.C., with state, city, and local ceremonies and programs held in most of the fifty states, and on U.S. military ships and stations around the world. The United States Holocaust Memorial Museum (USHMM) designates a theme for each year's programs, and provides materials to help support remembrance efforts.

Iron Mountain has a new partnership with the USHMM through our Living Legacy Initiative – our charitable commitment to preserve and make accessible historical and cultural information and assets. Iron Mountain’s grant will support the discoverability and eventual digitization of archival materials from the U.S. prosecutors from the Nuremberg Trials, which helped prosecute Nazi leadership after World War II. The 300,000 pages contained post-war documentation that were essential to the war crime trials and helped set the stage for international law. The documents will serve as learning aids for years to come. Because of Iron Mountain’s support for the Nuremberg Trials, we were invited to participate in the Days of Remembrance events.

The first day held an unveiling in which Iron Mountain was thanked for our financial gift and an inscription was unveiled on its wall. “It was an honor to attend the Days of Remembrance unveiling ceremony,” said Theresa Pattara, VP Government Affairs. “We listened to families of survivors speak and also heard about the personal experiences of some of the newer Museum staff. I learned much about the Museum’s role in not only educating new generations about the atrocities that occurred, but also its work to prevent similar ones from occurring again. I’m proud that Iron Mountain is able to support access to the Nuremburg prosecutors’ records through the Living Legacy Initiative.”

On the second day, Iron Mountain employees were able to attend the U.S. Capitol in Washington, DC for the National Commemoration of the Days of Remembrance. Israel’s Ambassador, Ron Dermer, offered remarks and music was played by the US Army Band. “The setting was extremely powerful with Holocaust survivors in attendance,” said Chris Smith, senior Vice President of Records Management. “Our Living Legacy program is a true testament of Iron Mountain’s core values and I am so proud to work for a company who invests time, effort and money into worthy causes like the United States Holocaust Museum Memorial.”

Since 1982, the United States Holocaust Memorial Museum (USHMM) has led the National Days of Remembrance ceremony with Holocaust survivors, members of Congress, White House officials, liberators, and community members at the U.S. Capitol. 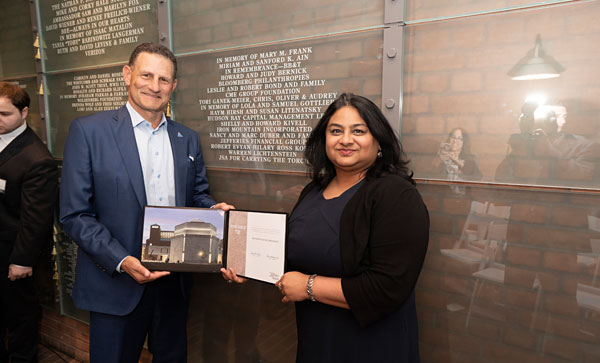