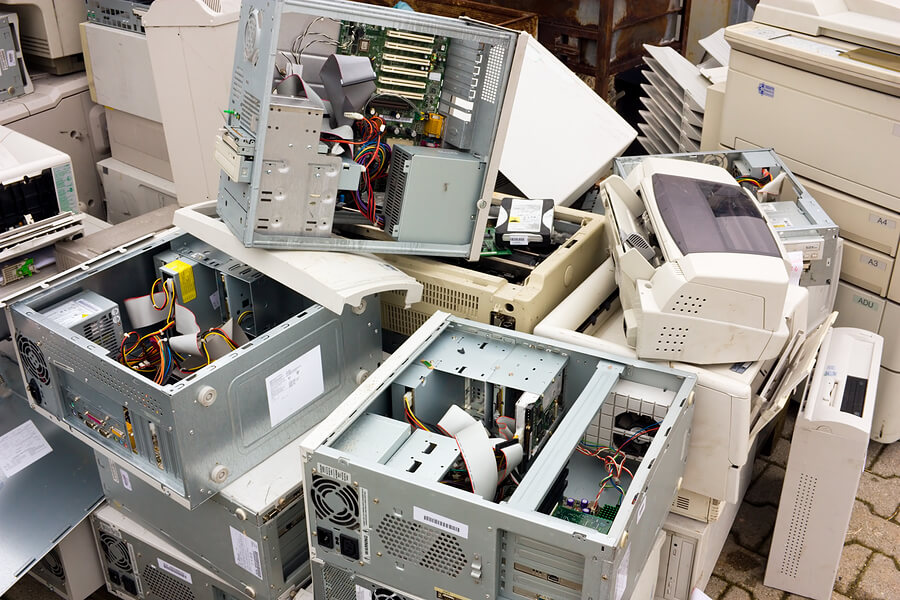 Despite efforts to raise awareness of risks of improper electronic waste disposal, the world is still doing a poor job of it, according to a U.N. report.

Despite years of effort by technology companies, records management firms and environmental groups to raise awareness of the risks of improper electronic waste disposal, the world is still doing a pretty miserable job of it.

A new report by the United Nations’ International Telecommunication Union finds that only about 20% of the roughly 49 million tons of old phones, computers, TVs and other high-tech trash the world created last year was recycled through appropriate channels.

The problem is only going get worse as the amount of electronic waste (e-waste) is expected to increase to 57.5 million tons annually by 2021. There are several reasons for this trend. One is that people are using more devices and discarding them more often. The average useful life of a smart phone – which 77% of Americans now own – is less than two years. Another is that prices continue to fall for most electronics, enhancing their disposability. Technology shifts, such as the transition from CRT to flat-panel displays, have also rapidly rendered millions of devices obsolete. And even though all of North America, Northern Europe, and Eastern Asia are covered by recycling legislation, enforcement is often difficult. The fact is that if people and companies choose to throw their small electronics in the trash, it’s very hard to stop them.

Even recycling firms that advertise themselves as responsible don’t necessarily play by the rules. In 2016, the Basel Action Network, an e-waste watchdog group, published results of a two-year investigation in which old computers, TVs and printers were outfitted with geolocation devices and dropped off at “green” or “environmentally responsible” recovery and recycling facilities. More than one-third of those devices ended up overseas.

In fact, of the 80% of e-waste that isn’t recycled, the fate of 95% of it isn’t known, the report notes. The authors speculate that much of the waste from the United States is shipped to countries that have few regulations.

To be fair, the U.S. does somewhat better than the rest of the world at handling electronic waste disposal responsibly, but only slightly, with a 22% collection rate. However, the U.S. also generates significantly more electronic waste in the first place. Recycling rates in Switzerland, Sweden, and Norway are around 70%, so there is clearly a lot of opportunity to improve.

Tossing electronics in landfills or shipping them overseas isn’t just irresponsible, it’s also costly. E-waste contains precious metals like gold, silver, copper, platinum and palladium. There’s also value in heavier materials like iron and aluminum, as well as recyclable plastics. Altogether, the U.N. researchers estimate that about $65 billion worth of raw materials are discarded along with e-waste each year. Gold and plastics together account for 60% of that total.

A lot of devices also go in the trash that don’t have to. For example, about 1.2 million tons of power adapters are thrown away each year, even those these devices don’t become obsolete in the way that computers and smart phones do, and the materials inside them are relatively easy to recover.

While the report doesn’t touch on the security and privacy implications of e-waste, that issue should be front and center for corporations. Hard drives, smart phones, and even thumb drives can contain sensitive information that could turn into a full-blown data breach if compromised. The cost savings of cutting corners on e-waste disposal pale in comparison to the potential legal liabilities.

The safest and most responsible way to handle e-waste is to work with a certified IT asset disposition (ITAD) company. These firms pick up old equipment either upon request or on a regular schedule and recycle it under strict no-landfill policies. They can even harvest valuable components and materials and remarket them to reduce customer costs.

Equally important is that responsible ITAD providers can thoroughly remove all data from recycled equipment according to Department of Defense guidelines, and provide a certificate attesting that the job was completed in accordance with all laws and regulations. Every step of the process is documented and secure.

The U.N. report is sobering, but it’s also a wake-up call. Responsible handling electronic waste disposal doesn’t have to be expensive or time-consuming. Not only does it make good business sense; it’s also the right thing to do.